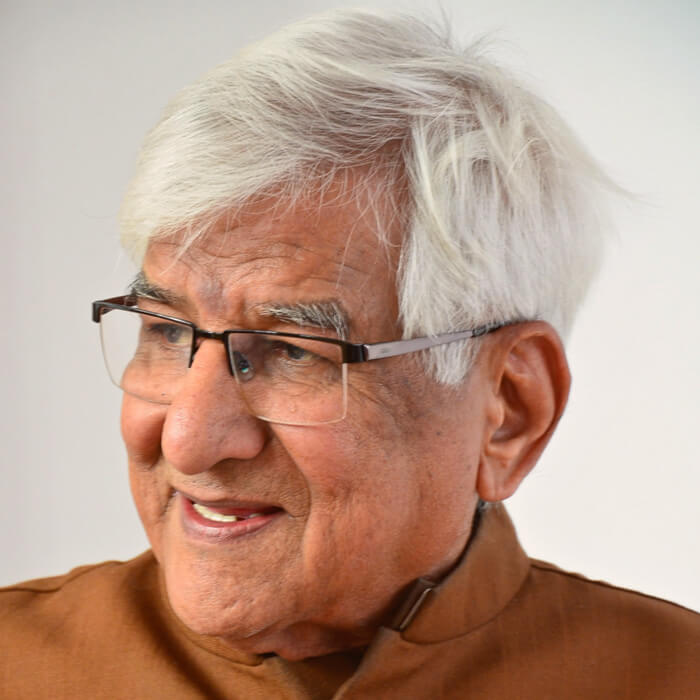 Shri O.P. Tiwari (Tiwariji) has dedicated his life to the practice and teaching of yoga. For the past forty years he has been head of Kaivalyadhama, a yogic research institute near Mumbai, India.

Established by his guru Swami Kuvalayananda in 1924, the institute has been a pioneer in scientific research related to yoga. Tiwariji has accomplished all the pranayama practices and has a deep philosophical and scientific understanding. Respected as one of the few true masters of pranayama in the world today, he spends most of his time in private practice in India.

Tiwariji is a direct disciple of the late Swami Kuvalayanandaji, the founder of the Kaivalyadhama Yoga Institute, who appointed Tiwariji Secretary General of the institute in 1965. Upon being appointed, he was initially tasked with the duty of developing the institute and growing its yoga college, Gordhandas Seksaria College – the first yogic college of its kind. Concurrently, he served as one of the primary representatives for yoga education, physical culture and policy within many committees for the Government of India.

Tiwariji holds a BA in Economics, English and Philosophy and an MA in Economics from Allahabad University. In total, he has more than fifty years’ experience in yoga therapy, teaching and policy. He is currently the President of the Indian Yoga Association (IYA) formed under the aegis of the Ministry of AYUSH, Government of India and the President of the Council of Yoga Accreditation International. He is also a member of the Governing Body of the Central Council of Research in Yoga and Naturopathy under the Ministry of AYUSH, Government of India. From 2002 to 2013 he served as the Vice Chancellor, and is now the President, of SVYASA (Swami Vivekananda Yoga Anusandhana Samsthana), a yoga university in Bangalore.

Tiwariji’s role as an administrator and policy maker is parallel to his role as a teacher. After completing his initial education in yoga in 1960, Tiwariji began to teach asana and pranayama within Kaivalyadhama. In 1975, he attended his first International Conference on Yoga and Mental Health in Chicago. Following this, he was invited to hold his first international pranayama workshop in France in 1983.

For the past thirty years Tiwariji has been traveling globally, training others in pranayama. He regularly travels to China, Thailand, Taiwan, France and the United States for workshops. In 1989, he published his first book Asanas Why and How? which provides a commentary on the prescription and method behind various Hatha yoga asanas. The book was awarded “Book of the Year” by the Indian Ministry of Education (Sports Authority of India). Tiwariji has dedicated his life to the practice, teaching and promotion of yoga throughout the globe. He continues to guide the activities of the Kaivalyadhama institution and its centres globally.

As one of the world’s leading authorities in pranayama, I feel so fortunate to be able to study with Tiwariji. After several years of study with him at his institute in Lonavla, India, as well as in Thailand, he certified me to teach pranayama and I pursue my studies with him every year.

We go through the breath to channelise the behaviour of the mind (the chitta vritti) - Shri O.P. Tiwariji